Durable, portable, and ready when you need them: We love the full-sized collapsible shovels from DMOS.

It isn’t until you find yourself in a situation where you need one that you realize just how important a shovel is in your toolkit. From putting out the campfire with dirt to clearing rocks at the perfect boondocking site to digging out sand, mud, snow, and dirt around your vehicle wheels, a shovel comes in handy in a variety of camping situations.

The problem, of course, is size. A full-sized shovel is simply not practical while out on the road. And most small travel shovels sacrifice power for portability. That's the challenge that drives DMOS Collective, the company behind one of our favorite tools on Airstream Supply Company: The Delta Shovel.

Expertly designed and fully collapsible, the Delta Shovel comes in two variations – the original Delta features a stainless steel blade while the Delta Pro has an aluminum blade. Both shovels perform better than most standard garden shovels, but collapse down for ultimate portability. Small enough to tuck neatly into your Airstream’s external storage compartment (or under the seat in your tow vehicle), the telescopic handle of a DMOS Delta Shovel extends quickly to a full 51 inches but pack down to half that size.

A locking pin mechanism lets you position the blade for use as a shovel, or set the blade at a 90-degree angle to the handle for use as a hoe to rake out debris or clear a level area. DMOS Delta Shovels are truly as versatile as they are portable.

“We like to say we're building tools for people who do,” said DMOS Collective founder Susan Pieper, who brought the first DMOS shovel to market in 2015. “We make shovels for adventurers, explorers, overlanders – the people who get out there and get after it. These are shovels for people who want the right tools at hand, but never in the way.”

That design mentality has fueled DMOS over the years as they’ve refined their designs and added new products to the mix. The company’s name is an acronym for Do More Outrageous Stuff, and that philosophy guides them today as they design tools for people who embrace adventure in their everyday lives.

The first DMOS shovels (and still some of their best-selling designs) were aimed at backcountry snow sports enthusiasts and were born out of necessity.

"My son was into snowboarding, and he and his friends would build kickers out in the backcountry with these flimsy plastic shovels,” Susan remembered of that early inspiration. “One after another the shovels would break.”

There was a hole in the market, and Susan saw an opportunity. Shovels were either too cheaply made, too bulky, or too small and ineffective. Most portable shovels can trace roots back to entrenching tools that have been around in mostly the same form since the time of ancient Rome.

“These were short tools that were made to be used while you were on your knees, kneeling down and digging out a trench while you avoided enemy fire overhead,” said Susan of this style of tool that is still a common option on the market. “The problem is that you can’t get a lot of power and performance out of these short-handled tools.”

The first DMOS shovels were squarely aimed at moving snow, sand, and mud. Over the years, DMOS has expanded their line of portable shovels to include tools made for prying up rocks, digging into hard-packed earth, and moving debris quickly and efficiently. The company has successfully crowd-funded three shovels through Kickstarter, with the Delta Shovel meeting its full funding requirement in just 45 minutes.

“People want solutions other than what exists at big box stores,” said Susan. “DMOS has broken through that pack and found a following with consumers who want well-made, reliable, and versatile products.”

A longtime overland enthusiast, Susan is a veteran of four Rebelle Rallies – the first women’s off-road navigation rally raid of its type in the United States, and the ultimate road trip for adventurous, competitive women. These rallies are the ultimate exercises in preparedness, where every setback is an opportunity to grow and problem solve. They are also excellent ways to put DMOS tools to the test in the wild.

“I’ve dug out under the wheels so we could get traction pads or car mats underneath the tires, and I’ve carried over gravel and dry earth for more traction,” she said. “Anybody can dig a vehicle out with their hands. The question is: How long do you want to be out there?” 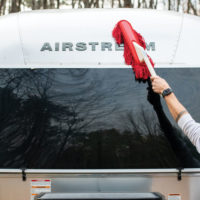 Clean, polish, and dust with the expert tools from California Car Duster – the experts in soft-touch auto maintenance.

Since 1933, Zarges has built the durable, lightweight cases that are perfect for Airstreaming.