More than simply minimalist fishing gear, Daggerfish Handreels inspire joy and calm in the outdoors.
40.4406°N, 79.9959°W
Pittsburgh, PA, USA
There are two types of fishing. One version involves trying to catch the most fish, a certain type of fish, or the biggest fish in the lake. The value proposition here lies in the competition – with fishing buddies, with lake records, and with yourself as you try to catch something bigger and better than what you caught a minute ago. Or yesterday. Or last summer.

The other type of fishing imparts value in the simple act of being on the water, casting the line, steadily reeling it in, and watching the bobber float on the waves. The satisfaction comes not from pulling the fish from the water, but in the waiting for the fish to come. There is no competition here, only relaxation. And while there is no inherently better way to fish, there is truth to the idea that fishing competitively – no matter how competitive it may be – involves the soaring highs of the catch and the crushing lows of the one that got away (or the one that never bit in the first place). Fishing purely for pleasure is a middle road that splits that difference – a simple act made remarkably accessible with the Daggerfish Handreel. 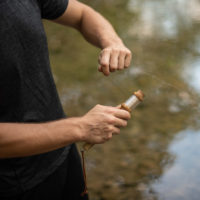 “So many of the products that are made for fishing are about catching more fish,” says Adam Nelson, who created the Daggerfish Handreel and hand-crafts them in Pennsylvania. “The Daggerfish will allow that, but the reality is that it allows you to be fishing. It’s not about achieving some goal.”

Sometimes referred to by the colloquial hobo handreel, the concept of a rod-less fishing reel is as old as the fishhook itself: Toss a baited hook in the water and reel it in around a stick.

“I’ve heard of people reeling in their fishing line around a tin can,” says Adam, who saw an opportunity to update that simple tool with a healthy dose of form and function. “I didn’t like the term hobo handreel, so I looked for a name to show that this style of fishing is a choice, not something you do because you're desperate."

Thus was born the Daggerfish.

Though Adam does source local wood for his projects, whenever possible he utilizes scrap wood left over from other projects at Protohaven – a non-profit makerspace in Pittsburgh, Pennsylvania where craftspeople like himself gather to build and trade advice on what they’ve learned. Spinning the 8-inch wood blanks on a lathe, Adam uses carbide turning tools to shape each Daggerfish. Inside the cylindrically body of the Daggerfish are two hollow, cork-capped compartments for storing bait, hooks, bobbers, and other fishing tackle. The fishing line wraps around the head of the handreel, and when not in use the hook holds securely in the cork for transportation.

“You can toss it in your bag, head out to the river after work and be fishing in a matter of moments,” says Adam of the inherent simplicity of the Daggerfish. “It’s about taking this to a place and using it and not worrying so much about everything. Letting yourself have everything you need – to go out and feel calm for a second sitting by the river because you don’t need anything else.”

Adam is the first to admit he waxes philosophical about the joy of fishing. If he’s poetic about the simple pleasure of waiting for a fish to tug on the line, it’s because he knows from experience.

“I was not into fishing as a kid,” he laughs. “My dad and brother and I would go fishing, but after 15 minutes I’d be out in the woods, or hunting along the edge of the water for lures people had lost.”

What he loved was being outside, and through high school and into college and beyond he found every reason he could to get out of doors. After college, real life crowded in and he found himself grinding away in the startup world. He started five businesses with varying degrees of success, but rarely felt as satisfied as he assumed he would.

“There’s so much competition in the startup world,” he says. “It took the fun out of it for me, and I had a small crisis of meaning.”

He began tinkering, drawing on woodworking skills imparted years before by his dad, who worked as a park ranger in Yosemite and the Grand Tetons before taking a job as the Chief Ranger of the Delaware Water Gap.

“I grew up in the National Parks,” Adam says. His dad taught him not only to value the outdoors, but to also value learning and trying new things.

“He knew a lot of the basic handyman stuff,” says Adam. “He helped me build my own bedroom in the basement so I didn’t have to share a room with my brother.”

As the mental toll of working in the startup world began to wear on him, chance led Adam to discover the concept of the hobo handreel. It wasn’t long before he carved his own and took it out to a local river. He took his initial design to a local outdoor store and they immediately bought ten and sold out within two weeks.

“I was having so much fun making the product, handing it to someone, and hearing them say it’s so cool – I want one,” he says with a laugh.

As he continues to refine his process and learn from the maker community around him – as well as the people who use his product – Adam realizes that Daggerfish is much more than just a unique tool.

“A lot of people are afraid of getting outdoors,” he admits. “They’re either afraid they don’t have enough to be comfortable, or they’re out there trying to out-do everyone else. You see this in the ultra-lighters, where the ethos is how far can you go? How little can you take with you? In between taking way more than you need and taking almost nothing is this great place where you have enough to just be calm.”

Adam sees a lot of parallels between his product, and the experiential nature of the Airstream.

“You have your house with you,” he says. “Worse comes to worse, you can pull over, sleep on it, and wake up and deal with it the next day. That’s a strong and resilient place to be. What I’m trying to achieve with the Daggerfish is to help people find that same experience – you don’t have to be afraid.” 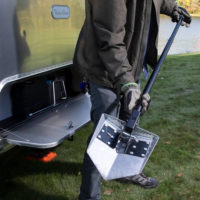 Durable, portable, and ready when you need them: We love the full-sized collapsible shovels from DMOS.

Our annual Gift Guide, featuring everything you need for the Streamers on your list.